Trials and Tribulations on the Tricky Treadmill

I get to go for a walk outside on most days, but on snowy or especially cold and windy days like today, Mom and I take turns on the treadmill.  So I think this time I'll share some stories about how I learned to use the treadmill.  At first, I was afraid of it, which you could probably have guessed if you read my last post.  Mom bribed me with treats to put my front feet on it for a little bit.  I don't at all mind being bribed with treats.  After we did the front feet every day for several weeks she bribed me to stand all the way up on the scary treadmill, and as it turned out, it wasn't so bad.  Made me feel taller!

Then one day, she pushed some buttons and made it start moving.  I did NOT stay on!  I jumped off as fast as I could, but alas, didn't get far, since I was on a leash.  After many tries at this I got to where I would take a few steps while it was going slowly.  And then one day.....Mom had her turn on the treadmill and didn't realize that her tennis shoes had left a sticker on the track.  Stepping on that confirmed my suspicions that the big scary machine was dangerous.  Yeeeowww!  We were pretty much back to square-one with Mom trying to convince me it was okay to walk on there.  I don't think she has ever exactly "lied" but there are occasions when her opinion turns out to be vastly different than mine. 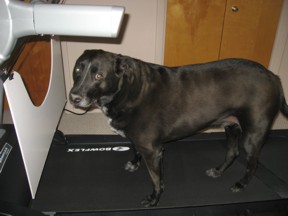 And then another day....just when I was getting used to walking a bit on it again, Mom had not put the cord for the emergency stop up far enough and I snagged it, so the machine stopped.  She got on the treadmill with me to fix it, went to step off the edge, tripped, and Stepped on My Tail.  See Mom, this is NOT a good plan!  She explained to me that not only did I not know how to walk on a treadmill, but she didn't exactly know how to teach a dog to walk on a treadmill either, having never done it before, so we'd just have to work on things.  It dawned on her that walking slowly was what was "tripping us up" so to speak, since it's not natural for a dog (or person) to walk that slowly.  She had just been trying it that way so I wouldn't be scared.

She learned to put the speed up to our normal walking speed right after the treadmill started, and I learned that this thing was okay after all.  She also realized that because the treadmill is open in the front I didn't know where to stop walking.  I kept hitting my toenails on the front of the hard plastic, so she cut out a piece of foam core to go in front of me.  I can still see over and around it, but it lets me know I shouldn't go any farther.  We also moved the treadmill so I can look outside (or watch a movie on the little TV in there - I like Fantasia). We didn't have any other major disasters, and eventually, I got to where I (kind of) like to get on the treadmill.  I like the "hills" when Mom sets the incline or program, and like the trotting too! Now I don't even need my leash or collar on, I just get up and go!

Yep, that's me, "The Awesome Dog of Awesomeness"!  Why am I so awesome?  I'm not exactly sure, but that's what Mom calls me and I really like the way she says it, so I keep the title.  She also tells me I'm a good boy, and I like that too!

I'm five years old, and I've been living with my owners Tori & Steve (Mom and Dad) since I was two.  I was scared and shaking most of the time when they brought me home from the shelter, and even though I didn't want to, I peed every time I got excited or scared......which was, to tell the truth, pretty much any time somebody talked to me, spoke loudly, waved their arms, moved too quickly, or any unexpected noise or event occurred.  Also, I tried to hide a lot but it didn't work out so well since I don't fit under or behind many things.  Much to my surprise, Mom and Dad didn't yell at me, or hit me, or lock me up  in a crate (where I spent a lot of time in my first two years).  It seems kind of silly to me now, but I'll admit that I was especially scared of Dad, who is tall and has a deep man voice that sometimes sounds like yelling. He didn't even get mad at my peeing and hiding though.  Mom asked him just to ignore it and to spoil me!  So every day when Dad came home from work he got a dog treat, then squatted down to about my height and held it out for me.  It took a long time until I was brave enough to go and get the treats.  After a while I even got brave enough to let him pet me after I took the treat. Now when Dad comes home I have to work for that treat, but I'll tell you more about that another time.  It took me about a year to stop the peeing and gain trust for people again.  During that year I was also learning new things that built my confidence, and I now know how to do many jobs and a few "tricks" too.  It makes me so happy to be able to help!

I wanted to blog about all the stuff I've learned over the last few years, and about cool and interesting things I find on the web.  I hope I'll be able to help other dogs and their people by talking about how I overcame my fears, and issues that concern dogs (especially dogs like me - black, and part pit bull).  Did you know about Black Dog Syndrome?  Mom and I didn't know about it until a month or so ago when she was looking for information on how to take pictures of me.  This week I've seen a couple of posts saying it is BDS Awareness month, so here is a link to some information:

Well I think this is probably enough about me for today, and I have to go out, so I'm going to post my first video and show you the cool gadget Dad made for me so I can let them know when I've gotta go!  It is by the back door through one of Mom's studio rooms where I hang out (see my nice comfy cuddle bed in the corner!) All I have to do is hit the button with my paw and somebody gets up to let me out.  It took me a while to train them so well.

Notes from Mom:
Cody might not know why he's so awesome, but I can tell you.  He's awesome because he has overcome his  abusive past to become an exceptionally helpful and loyal friend.  I began by teaching him the basic commands. I was told that he had been to "puppy school" early on, but by the time I got him he was too afraid to perform any of the tasks except for "sit".  He was really good at sit, except that it often meant he would run away and sit far away.  I used positive reinforcement training methods and LOTS of encouragement and once he started gaining confidence it was easy to see how smart and willing to learn he is.  In addition to the basics (sit, down, come, stand, heel, stay) he knows "brace", "hold", "go", "get it", (and specific items to get, such as get your leash or your basket) "paw it" "nose it" "close" (the door) "shove" (for when the door doesn't close all the way the first time), "up", "paws", and....probably a bunch more.  Some silly ones too "meow" (for those times when he has to speak to cats), and "roll over".  I hope you will join Cody and I as he continues to learn new things.
P.S.  Cody's button is an old Radio Shack recording device - we attached rubber feet to the bottom so it wouldn't skid, and a wood panel on top held in place with 2 screws and split-lock washers (used for springs).  The underside of the wood panel has a tiny screw that presses on the device button.  I'll post pics if anyone is interested.  Sorry the vid is so jumpy, normally he heads for the back door so I started walking that way then he got distracted by my holding the camera.