I get massages! Oh yes!


I was going to write about my morning chores, but Mom hasn't been feeling well over the last few weeks and didn't want to make a video, or do the morning chores with me - Lucky for me though, she has still given me my massages - she says it is therapeutic for both of us.  I think therapeutic means feels swell and makes us sleepy.  I'll let her tell you all about it, I'm chillin' 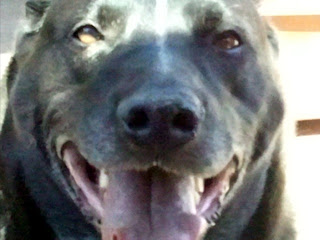 Cody is talking about the TTouch method of therapy, which I first discovered in the early 90's and used on my horses.  Steve and I don't know how or why it happens that somehow people find us and determine that we need abused or neglected animals, it just happens.  So one day, we were given a quarter horse gelding.  The woman who gave him to us had rescued him from an abusive home. She had been working with him, but things happened in her life and she had to give him up in order to move.

I had been fortunate in my early teens not only to have had a horse, but also to have met and worked with a number of great horse trainers from "back in the day".  When we were given the gelding I remembered hearing about a massage method that was good for calming horses, known as TTEAM (The Telling Touch Equine Awareness Method).  I learned the method from Linda Tellington-Jones books and videos, and a 4H leader who was also trying the method.  It seemed to work well for Buddy (the quarter horse) and "Shammy" (an Arabian mare I also had at the time....for you horse people, her actual name was *Napitok Snowfire ;) ).  I also used it on the dogs I had back then, but didn't have specific touches or techniques for them.

When we got Cody, I decided to try the TTouch on him since I heard it worked wonders for abused dogs.  I got the book Getting in TTouch with Your Dog: An Easy, Gentle Way to Better Health and Behavior and have seen a lot of progress with Cody since starting with the specific exercises aimed at his problems.  One of the biggest areas of improvement has been in him being able to relax for nail trimming & grooming.  He is much calmer, although, even after 4 years he still has some sensitive/fearful areas and it takes him a while to relax.  I will also admit though, that I don't perform the TTouch exercises as regularly as I should.

Here is a link to an article that explains more about the method, how and why it works, and some of the techniques.

and here is a link to Linda Tellington-Jones web site.

www.ttouch.com
Posted by Unknown at 9:26 AM